Don’t think bullet runout makes a difference? Check this out.

I like squeezing every bit of accuracy within reason that I can from my rifles.  One of them just seemed like it should do more, so I started analyzing different variables that could adversely effect it’s accuracy.

I began by systematically eliminating mechanical items which did bring out more potential, but surprisingly the thing that seemed to cause the greatest increase in accuracy was when I nearly eliminated the bullet runout. While checking my reloads more closely I noticed runout or “bullet wobble” in some cartridges was excessive.  By excessive I mean in the .010″ to .015″ range.

So I decided to back up and analyze every stage of the process to find where this runout was introduced, and eliminate it.

I started by grabbing a handful of rounds that had been fired from the rifle and checked the runout on the case neck with my concentricity gauge.  Runout was nearly zero on all the case necks before sizing.  That’s a good indicator of how well your rifle was chambered.

Next I got my Redding sizing die and sized several cases.  I cleaned them off and checked runout again and immediately noticed runout of about .011″.

The first cases were sized with the “peanut” still in the die.  So I took it out and sized some without it.  There was little if any difference.

I labeled those batches as Redding with peanut and without  then set them aside.

Now I let me clear something up right here.  I am not promoting Hornady, nor am I bashing Redding.  Most of my dies are made by Redding and I have no problem with them.  But apparently this particular die does have an issue.  I will make it plain to see when I’m promoting things by my flowery descriptions of them.

The next step was to get more of the Nosler fired brass from the same batch and size them with the Hornady die.  When I checked them the runout was around .002″.  Some were nearly perfect.  So I had located the culprit almost immediately.

Before loading the rounds I decided to do a little test inside of my main experiment so I grabbed another handful of brass from the same batch and sized them with the Hornady die.  I wanted to try both the Hornady seater die and the Wilson seater die / Arbor press combo to see if there was any difference in concentricity in seated rounds with the two systems.

All the brass was cleaned again and primed with Federal 215M Primers from the same box.   I used the RCBS Chargemaster scale to meter out charges to within .1 grain of the new IMR-7977 powder which by the way is awesome.  But don’t go run out and buy a bunch cause then I may start having trouble finding the stuff.  All powder was from same bottle so there were no batch issues.  The bullets were Berger Target VLDs and were all from the same box. 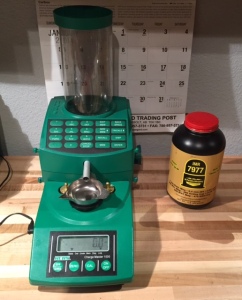 I used the Hornady seater die to seat some rounds and measured them again.  They measured from nearly perfect to about .004″ at the outermost limit. 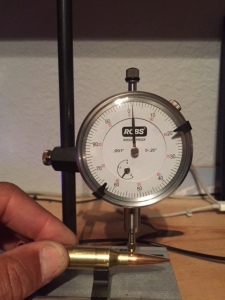 Next I seated the Redding batch of brass and got as expected runout of .010″ or more. 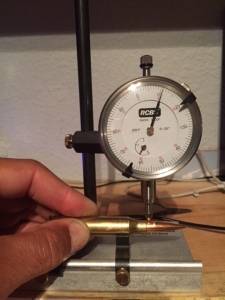 I tried using the Wilson / Arbor combo and noticed no real difference in runout.  The Hornady die was a little easier to remove the loaded cartridges from because they would sometime stick in the Wilson.  I do usually use the Wilson setup because it’s accurate and very portable.

So I loaded up and was off to Top Gun Texas shooting range (www.topguntexas.com).  This range is conveniently located near Dallas and goes out to five hundred yards.  It’s got covered concrete benches, a little restaurant, indoor air conditioned bathrooms, and even a little spot inside to reload.  So it’s my choice of places to do the majority of my testing and other bullet witchcrafery.

Since most of my rifle set ups are for long range and I shoot mostly long range I test my ammo and equipment out to at least four or five hundred yards.  My theory is that if you if the bullet has got to go a long way I want to see how it acts once it starts to stretch out a bit.

I started out by setting up the BOTW 7mm Rem Mag (pictured below) in a Caldwell rest and heavy leather rear bag (not pictured).  The photo is actually my rifle on one of my BOTW tripods and Flatline Dirtbag that I always hunt with.

I do not fire “fouling” shots.  Even when I’m just testing ammo I am training and learning how my equipment will react in the field.  The MOST important round out of a hunting rifle is the first one, since that is the one that you are sending down range at one of Gods tasty creations.  I think the animal deserves the respect of you knowing what that first round is going to do so he suffers as little as possible.  Snipers need the same level of accuracy, but since the target that our snipers would be looking to engage put himself into that position through his behavior, I don’t have the same sympathy for him.  So I could care less if they get centerpunched in the chest or the jiblets.  Either shot will put an end to his shenanigans.

Below you will see a steel target with two groups.  Since I had relatively good conditions I shot at five hundred yards.  There is a spray paint can held in the middle for perspective.  The group on the left is my first group  with the Hornady die sized batch of brass.  It’s actually four shots, but I’ll explain that part a little later.  I let the rifle cool for about ten minutes and then shot the group to the right of the paint with the Redding die sized batch. Notice there is a small dot just low and left of the can.  That is not a shot, it’s a weld on the steel.  After I shot the group to the right , I immediately fired a fourth Hornady batch and it dropped in the same group on the left.  Not too confusing I hope….   Hey, I freely admit I’m a lot more adept at pulling triggers than punching computer keys and making sentences. 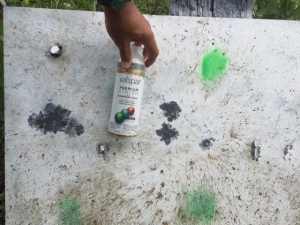 To truly appreciate the group on the left you will need to enlarge the photo.  It’s actually only about 2 to 2.25″ center to center.

The next series is pictured below and goes as follows.  Far left is Redding Batch, middle is Hornady batch, and upper right is Redding  batch.

This is a close up of the Redding batch picture 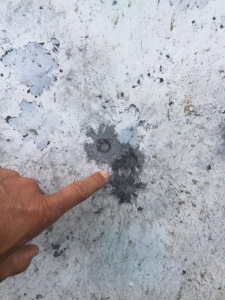 Below are the last three shots of the day with the Hornady batch.  All rounds fired where documented and  there was also a witness, just in case people thought I was trying to fudge the results.  By the end of the day I finally found that fancy little magnetic ruler that I made for just such occasions.  So I actually measured the last group.  Center to center is two inches.

Last three shots of the day.

Last three shots of the day.

As you can see there was a marked difference between the two batches.  I strongly suggest that you get a gauge and run some of your rounds over it.  You may be surprised.

Also this is an easy test to try for yourself to see if you get the same results that I did.  I could have delved a lot deeper and shot a lot more groups, but honestly it was immediately obvious to me that the rounds with less runout were much more consistent downrange.

Now for the why they react this way when they are nice and straight or a little crooked?  I’m sure someone has some type of gauge or machine that could tell us for certain.  However, first thing pops into my head is when the bullet starts it’s journey in the barrel a little sideways it probably comes out a little sideways too.  If it’s wobbling when it comes I can’t imagine it would keep the level of gyroscopic stability needed to go to the exact same spot over and over at five hundred or fifteen hundred yards.  So there is my theory.  Come up with your own and drop me a line.  I’m on a constant quest to learn.

So Dave Doumani and I got the Redding die out and took it apart.  Cleaned it thoroughly, tried loosening the bushing, loosened locking lug, and finally took the bushing completely out.  Runout got  down to about .004 – .006.   After we took the bushing out it dropped to near zero.  So it seems like the bushing itself may be the problem.

We tested each piece of brass before sizing and they were all near perfect.  We also tested the Hornady die again and it still introduced nearly zero runout.

I’m still really curious how it started bending the brass, but I don’t think  it’s worth continued testing of this die since the Hornady works fine.  Point is just keep an eye on your gear.

5 comments on “Don’t think bullet runout makes a difference? Check this out.”