I’m curious. What’s better?  Letting undisciplined, hard headed kids do whatever they want and ignore the behavior?  Or treat them similar to how mom would have treated me in this situation?  Much harsher than what’s on this video I assure you.

I have to agree with Mr. Cain.  But I would like to hear some other opinions and reasons.

This is  a Walther 22 with regular CCI ammo. Cannot wait to get some Omegas for my 7mags and 6.5-284s.  Once I got my aiming point I could make consistent hits at 50 yards.

And he made a hit

What an awesome Day

Successful first round hit at 1350 yards. 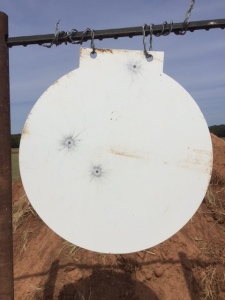 Hits at one mile.

Yesterday was busy as heck, but absolutely awesome.  Started out in cahoots with John Walding, Luke Cifka and several other friends at Reilly’s range near Oklahoma where we did a small demo with some of our rifles and scopes out to one mile.  Also got to hang out with some great guys including Pro Golfer David Feherty.

Anson Gordon from SilencerCO showed up with a bunch of their suppressors.  These things are going past being suppressors and are getting into the realm of actual silencers.  He put their Omega on my 7mm RSAUM and I don’t ever want to shoot without it again.  I was amazed that not only did I have only .1 mil shift in POI but the things are so quiet that it’s scary.  Recoil was actually less than with a normal muzzle brake so spotting my shots was easy.   As for accuracy it was not affected one bit.  Velocity may have gone up a tad, but not enough to cause a problem.   Unfortunately I have to go through all the paperwork BS to get it, but I put in an order on the spot.

I set up two Bullseye AmmoCams and they worked flawlessly through out the entire day of shooting.   I’m still learning the capabilities of these things, but life is a lot easier with them in my toolbox. Can’t wait for the record feature on the next update.

From there I took off back to Dallas for a National Brotherhood of Hunters social.  Talk about some great food, stories and people.  Houston Smith, Mikel Giles, Rick Price and Edward West all showed up and Earl Wooten was kind enough to host it in his beautiful home.

We got caught up on some new hunts and other activities coming up and also saw some pics from Houston’s Thar hunt that turned into a hunting spree.  Beautiful scenery and animals.  I’m really Looking forward to the next get together.

For anyone not familiar with this organization it’s designed to promote outdoor sports, especially hunting among the black community.  Thanks to TV and pretty much any other media source we very rarely see or hear anything positive when a black man and a gun is mentioned in the same breath.  However these guys are all ethical hunters, archers, fishermen and general outdoorsmen / enthusiasts.  Like it or not being able to provide for yourself your family and even some deserving friends  in a bad situation is, in my not humble opinion absolutely necessary for any man.  Hunting, fishing and general outdoor knowledge is a means to this end.

For anyone interested I am now in the process of becoming a dealer for SilencerCo and should soon be able to stretch the limits of your rifles even further.  You can already get the Bullseye Cameras off my website or call me at 214-556-5339.

Also check out the National Brotherhood of Hunters at http://www.nationalbrotherhoodofhunters.org.

Bullseye Camera pic at one mile

Out with John Walding near Oklahoma doing a one mile demo today.

I set my Bullseye Camera out and it connected three devices at one mile within two minutes.