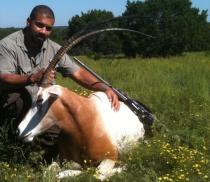 Lloyd has most recently been featured on The Best of the West TV show, reviewing the Huskemaw Scope.   Additionally, Lloyd has a featured monthly newsletter and a “How-to” Guide.

Lloyd worked with a Tactical Support Team (TST) in Baghdad. His primary task was securing the rear of a counter assault convoy during runs throughout Baghdad while in support of protective details. At this time Lloyd was chosen for that particular position because of his maturity level to avoid any unnecessary incidents. His team also provided on-site security, responded to requests for assistance, emergency evacuations, and provided first responder medical assistance.

Lloyd worked for in Kosovo as a Senior Operator of the Close Protection Unit (CPU) and as the Team Leader for the Operational Support Unit (OSU). Both units worked with Kosovo Security Forces (KFOR) in the Mitrovica region, which was considered a potentially hostile area demarcated by ethnic-political tensions. Lloyd was part of the operations team for a multi-national police detachment tasked with Dignitary protection & extractions, security escort of high risk transports/UN personnel/endangered Kosovar citizens, and high risk warrant services and arrests. The unit was also responsible for tactical emergency responses in the Mitrovica region.

Lloyd began his career as a Dispatcher, and was promoted to Patrolman with the general Patrolman duties